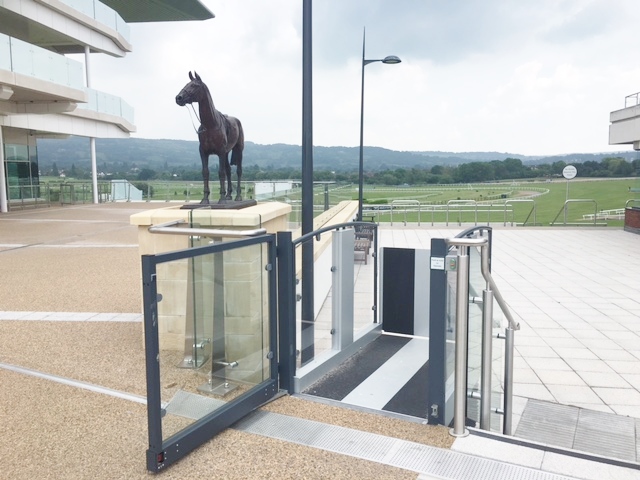 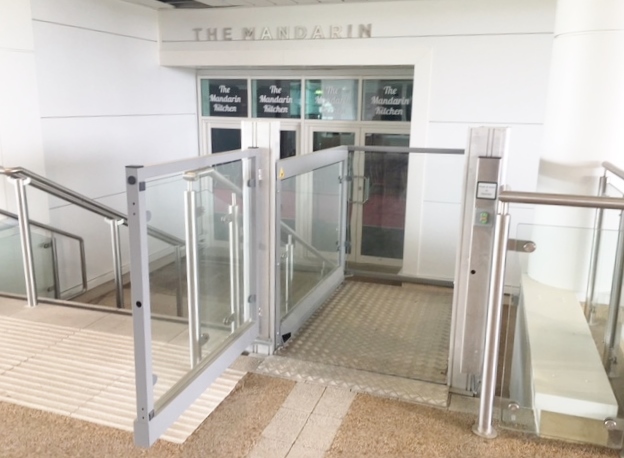 Cams Hall Golf Club, based in Fareham, Hampshire, came to us in need of a way for all golf club visitors to be able to access the 1st floor of the clubhouse. The 1st floor of the clubhouse overlooks 18th Green and offers unrestricted views of the surrounding course as well as being used as a function room and events space. The upstairs of the clubhouse is hired out to members of the public for regularevents as well as one off functions. The client really wanted to have a golf course clubhouse lift so that the anyone and everyone could access the whole clubhouse and make use of the wonderful facilities it boasts.

In order to see the wonderful vistas of the golf course we opted for a glass lift shaft, this allows allows a lot more light into the building giving it an airy and spacious feel. The shaft is in the middle of an existing square staircase up to the first floor and the 18th green can be seen as you travel up in the lift. The lift we installed was a vector system that only required a 50mm pit as the client did not want to excavate a pit for the lift so didn't have the added expense of builders' work. We simply removed the carpet and underlay then installed a 20mm stainless steel ramp up to the ground floor level of the lift. The lift travels a total distance of 3.9 metres between floors and the cabin measures 1480mm x 1100mm, giving a large interior so that a user can even fit their clubs in with them. The lift was linked into the fire alarm system so that in the event of a fire, the lift automatically descends to the ground floor.

The lift allows members and guests of the club complete and unlimited access to the clubhouse's facilities as well as providing disabled access for functions and private parties held on the first floor. The lift adds to this fantastic clubhouse and wonderful golf club. 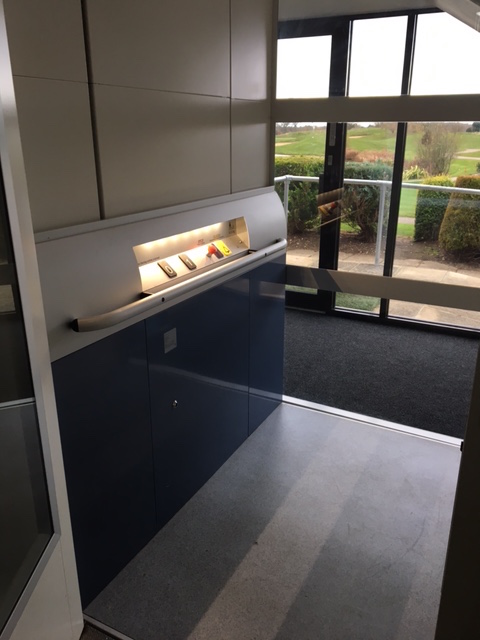 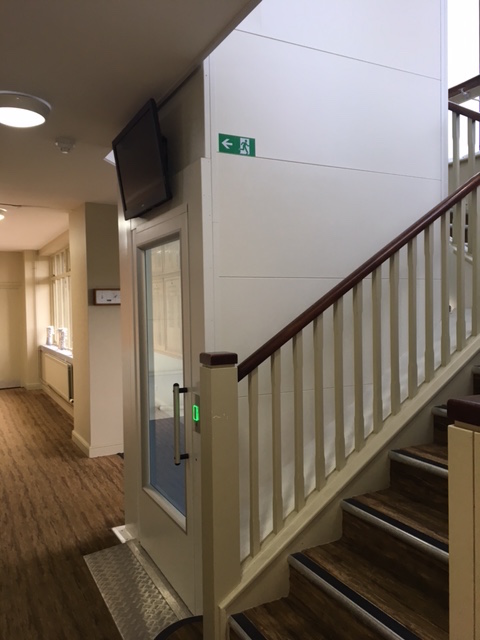 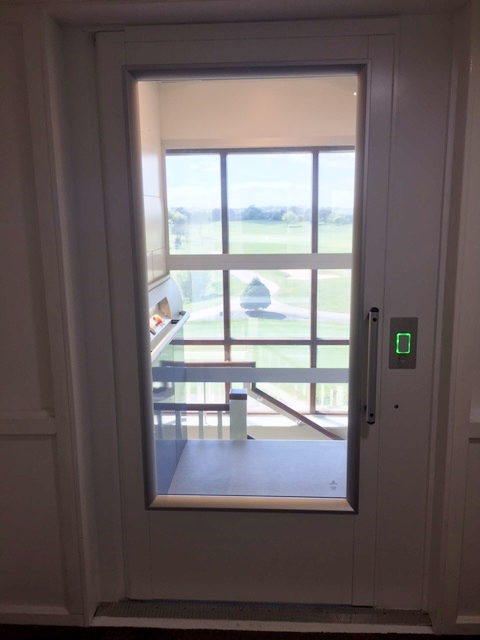 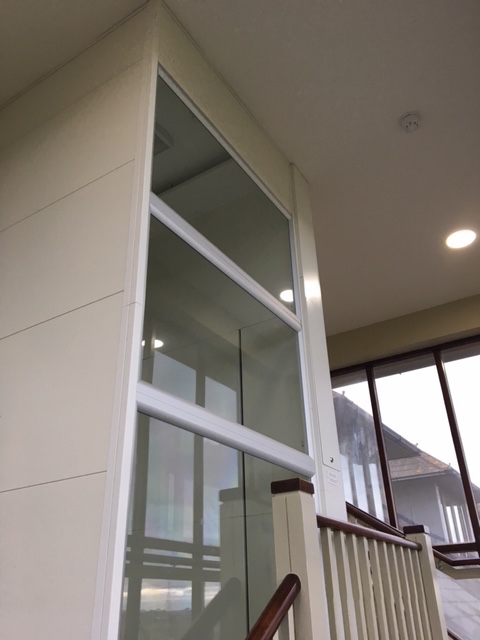 An exclusive members' club in Devonshire Square in the City of London asked us to come up with plans to fit both an outside step lift and a platform lift within the lobby. The Devonshire Club needed products that would fit in with the club's appearance with a blend of traditional and modern decor. The Devonshire Club features 3 large bars, 2 lounges and plenty of outdoor space in particular a large stone laid terrace and garden. The club also features restaurants and 68 rooms available to both members and non-members with the usual functions rooms and event spaces available for conferences and meetings.

SUSD, the firm behind the project, were looking for an  indoor platform lift to be installed between the reception and main bar so that disabled guests could make use of the club's facilities. The difference in floor level was 1000mm and the client did not want a cumbersome platform lift so instead chose one of our products. The lift was installed in a mirrored glass shaft to match the building's existing wall. In addition, the lift's platform was finished with the original stone flooring so that the platform disappears into the floor on the ground floor. The door into the bar area was made out of hard wood to match the bar's decor for a stunning finish.

In addition to the lift connecting the reception and bar, the client needed an outdoor step lift so that guests could enjoy the winter gardens that are situated outside of the club. As the travel for the lift was only small, we installed another platform lift which matched the stone laid terrace. This lift is extremely versatile as well as being rugged and the original flooring or tiles can be used so the lift can become hidden in plain sight. The lift was finished with a glass door to match the glass balustrade of the rest of the terrace. The client was extremely pleased with the finished of both lifts and how seamlessly they blended into the building's aesthetics. 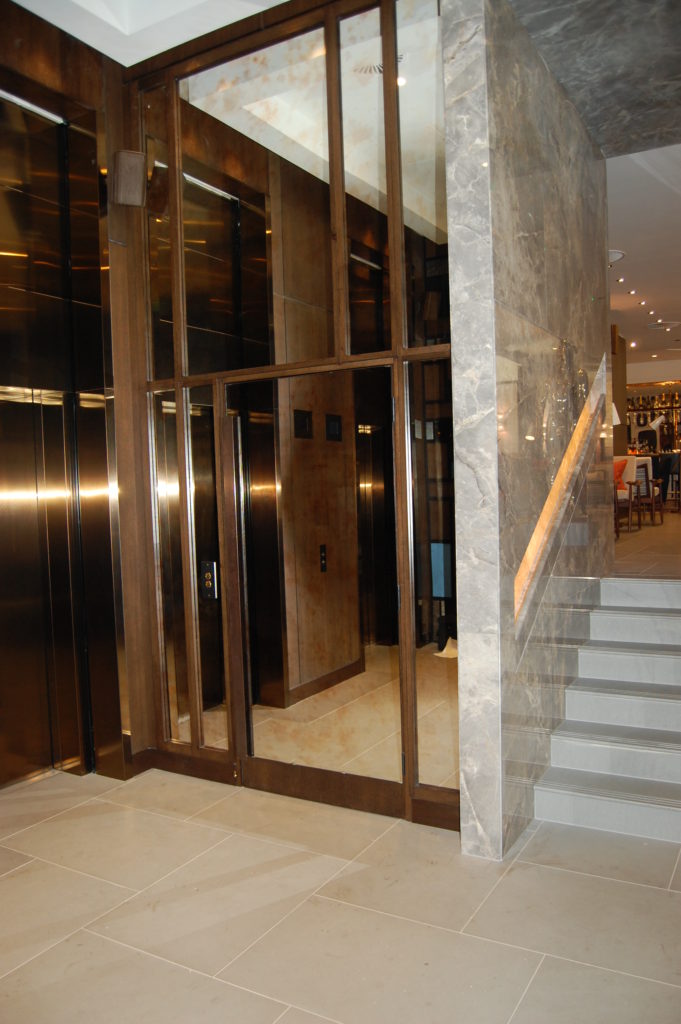 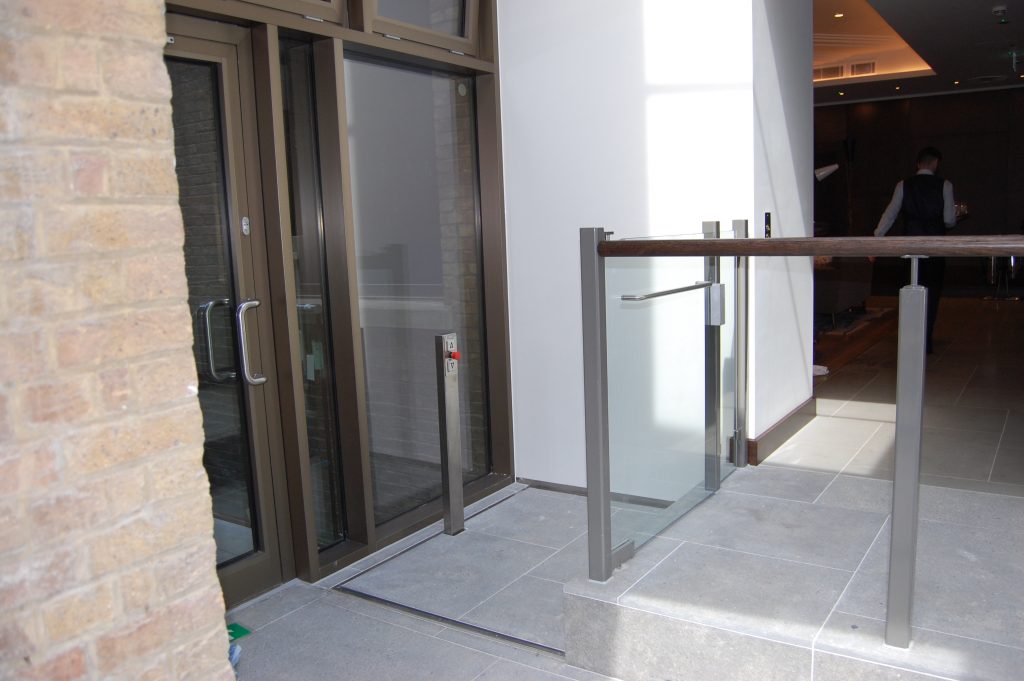 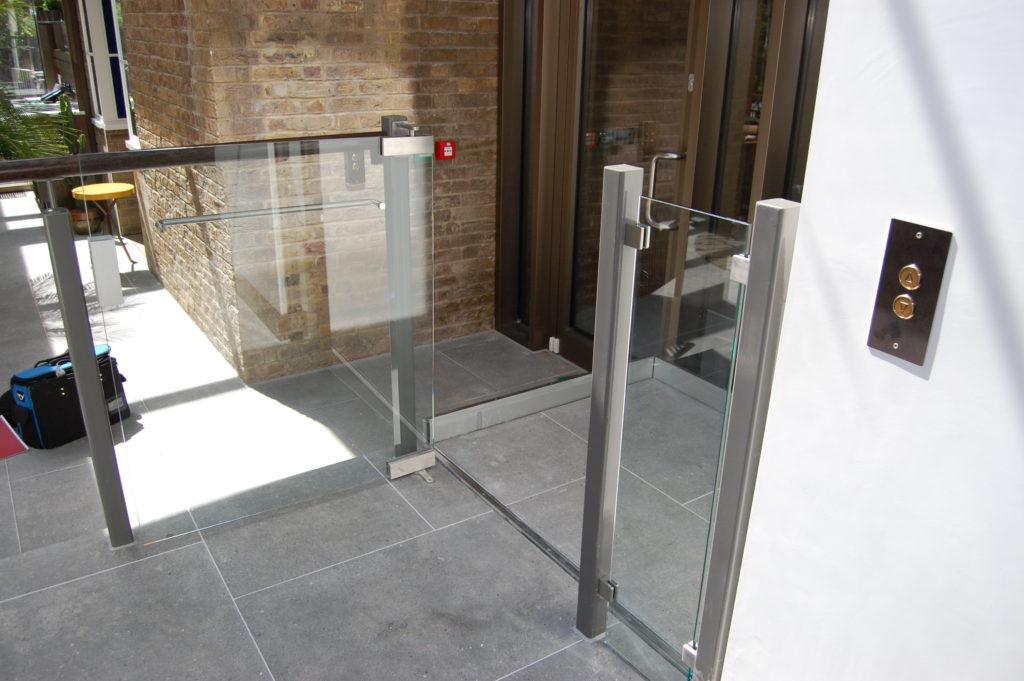 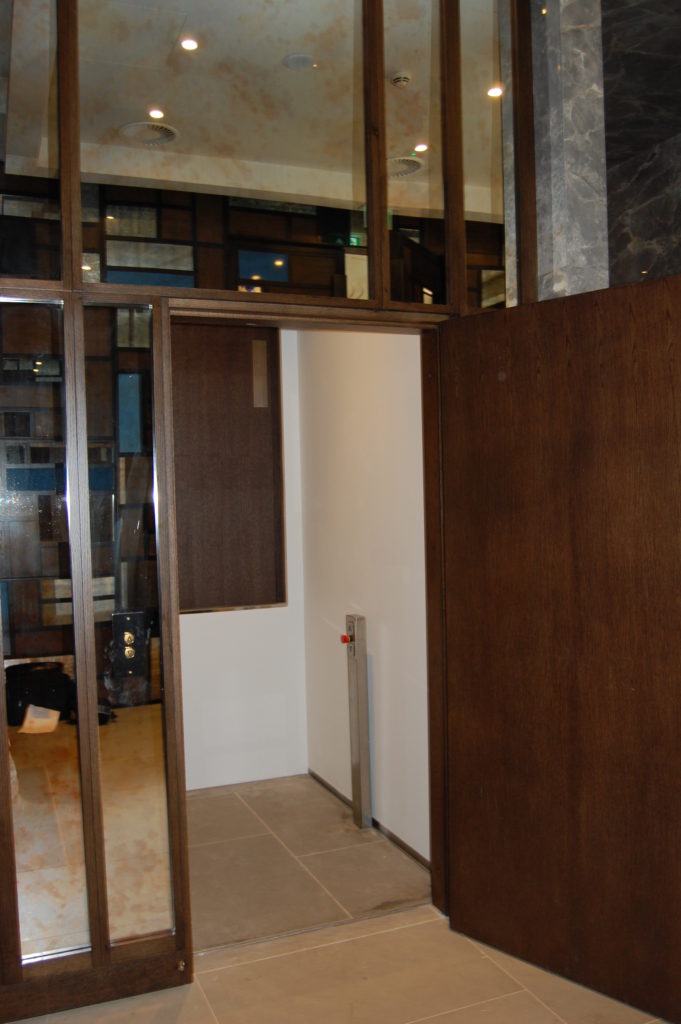 Back in 2012 we were asked by the well known temporary structure supplier Portakabin to help with the access issues for their Operations Centre in Stratford, East London during the London 2012 Olympics. They needed to provide access to the viewing platform on top of their temporary structure for mobility impaired and wheelchair bound visitors.

The specific requirements  of the lift were - it had to travel over 11 metres, they needed an external lift shaft attached to their existing structure, a through lift cabin with doors on both sides of the shaft, fire control sensors and testers and an intercom that connected directly to the main reception - they needed all of this done within 40 days! We even took into account any prevailing winds as the lift would be over 13 metres tall and attached to a temporary structure.

We initially met with Portakabin on 31st May and on the day we managed to give an immediate verbal quotation after taking all of the necessary measurements. By the afternoon we had contacted the manufacturer to produce detailed drawings of the lift and were able to provide a full quotation with the necessary builders' work. Within 5 working days Portakabin confirmed the order and the lift was installed by 29th June (only 21 days later!), this was 10 days before the deadline and the client was totally delighted with the finished product. 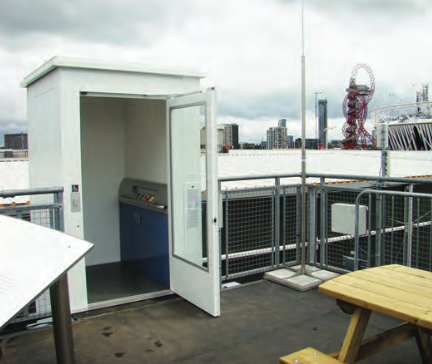 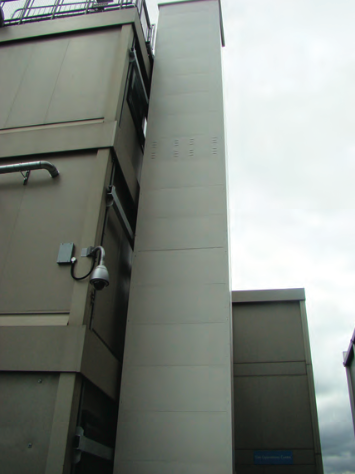 We use cookies to ensure that we give you the best experience on our website. If you continue to use this site we will assume that you agree to the use of cookies.OKRead more